The Existential Unconscious and The Therapeutic Relationship: Otto Rank and the Birth of Existential-Humanistic Psychotherapy

CEs*: 3 CEs approved for live presentation; $18.50 CE fee. Please connect with us for CE course info or for disability accommodation.

We invite you to join us for this webinar about Otto Rank’s influence on Carl Rogers, Rollo May and the development of Existential-Humanistic Psychotherapy, presented by pre-eminent Otto Rank scholar, Dr. Robert Kramer!

This workshop is an introduction to the central and influential role Otto Rank’s perspectives on psychology and psychotherapy have played in the development of the existential and humanistic movements within the disciplines of psychology and psychotherapy. Though many students and professionals within these fields are likely to associate Rank with Sigmund Freud and psychodynamic theories and approaches – and though many know about the key role people like Rollo May, Ernest Becker, Carl Rogers, James Bugental, Irv Yalom and Abraham Maslow have played in the development of existential and humanistic approaches – fewer are aware of the Rankian concepts that sit at the foundations of existential and humanistic psychology. In a word, Rank discovered the “existential unconscious”—an unconscious far more anxiety-proving and liberating than either the Freudian unconscious or the Jungian unconscious. Both the Freudian personal unconscious and the Jungian collective unconscious can be known. The existential (or Rankian) unconscious can never be known. It is a mystery wrapped in an enigma shrouded in darkness.

The workshop presenter, Dr. Robert Kramer, will outline Rank’s role in the evolution from first-wave, psychoanalytically-oriented psychotherapy to the third way of existential-humanistic psychotherapy, and in particular focus on Rank’s influence on Carl Rogers and Rollo May.

Workshop participants will learn about Rank’s emphasis on the therapeutic relationship as the primary agent for change, how that emphasis influenced Roger’s client-centered approach, and, in fact, helped eventually move psychotherapy away from perspectives that were based on seeing the therapist as the agent of change whose goal was to “fix” the patient. Unlike Freud, Rank also believed there was a necessity for metaphysical problems to be addressed in therapy – a position that inspired Rollo May and laid groundwork for the exploration of existential givens and cosmological forces in psychotherapy.

Dr. Kramer will also highlight Rank’s focuses on the relevance of existential anxiety as opposed to drive anxiety, and working with “patients” in the here-and-now in therapy, rather than on mining their past. This orientation toward being with and examining the living, present moment and all its possibilities and limitations is core to the existential-humanistic psychotherapeutic approach. This workshop will highlight how Rankian concepts form an existential-humanistic framework for clinical practice.

Preparing for the Workshop: Important Readings & Pre-Workshop Exercise
(This info will be also be included in your Registration Confirmation Email)

Pre-Workshop Exercise
Robert would like to have the attendees read this article, When We Die, and write 2 – 3 sentences of what comes to them in reading it. He will have attendees read what they wrote during the intro section of the workshop.

Two Preparatory Readings Prior to Workshop
(We will provide registrants with PDFs of this book and journal article.)

Dr Kramer would like attendees to read both of the above PDFs prior to the workshop, if possible (or at least skim through them if you don’t have enough time) – links to download both the book and the journal article will be found in your registration confirmation email.

Robert Kramer, PhD, is Professor of Psychoanalysis at Eötvös Loránd University in Budapest and a practicing psychoanalyst. He editor of Otto Rank’s A Psychology of Difference: The American Lectures (Princeton University Press, 1996); co-editor, with E. James Lieberman, of The Letters of Sigmund Freud and Otto Rank: Inside Psychoanalysis (Johns Hopkins University Press, 2012); and author of The Birth of Relationship Therapy: Carl Rogers Meets Otto Rank (Psychosozial Press, second ed. 2022, in press). During academic year 2015-16, he was the inaugural International Chair of Public Leadership at the National University of Public Service in Budapest, Hungary. From 2016-present he has taught at Eötvös Loránd University and at Corvinus University, both in Budapest. From 2002-2005, he was director of executive education at American University’s School of Public Affairs. In 2002, he received the Outstanding Teacher Award at AU. In 2004, he won the Curriculum Innovation Award of the American Society for Public Administration. From 2002-2004, he was an elected member of the Board of Directors of the Organizational Behavior Teaching Society for Management Educators, a group of 650 professors in leadership and management education worldwide. From 1975-2001, he served in progressively senior positions in the US government, including as a member of Vice-President Al Gore’s task force to reinvent the Federal government. 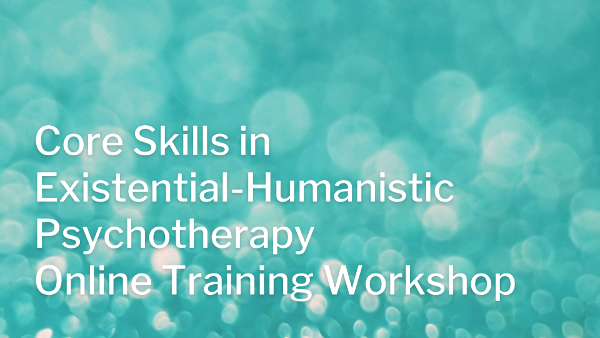 In this 16-hour core E-H therapy skills online training, leading instructors in the E-H field will provide theoretical explanation and experiential opportunities for the development and/or strengthening of skills and capacities that are not only core to the E-H approach but can also support therapists of many other modalities cultivate a foundation for optimizing their technical skills.

Get up to 70 off with Early Early Bird Offer

In this 16-hour online training, leading instructors in the (Existential-Humanistic) E-H therapy field will provide theoretical explanation and experiential opportunities for the development and/or strengthening of skills and capacities that are not only core to the E-H approach but can also support therapists of many other modalities cultivate a foundation for optimizing their technical skills.