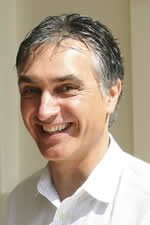 Nader R. Shabahangi, Ph.D., received his doctorate from Stanford University and is a licensed psychotherapist. His multicultural background has made him an advocate for different marginalized groups of society throughout his adult life.

In the 1980’s he worked with abused children and teenagers and led anticipatory bereavement groups for Coming Home Hospice. In 1992 he founded the non-profit organization Pacific Institute with the purpose of training psychotherapists in a multicultural, humanistic approach to counseling and to provide affordable therapy services to the many diverse groups living in San Francisco. In 1994, noticing the often inhumane treatment of the elderly living in institutions, he started to develop an innovative Gerontological Wellness Program in order to provide emotional support and mental health care services for the elderly. In 1997, together with his two brothers, Nader opened a residential care home for the elderly in San Francisco called Hayes Valley Care, where he could along with the Pacific institute Internship team implement the Gerontological Wellness Program.

Nader continues to create programs with the purpose of caring more comprehensively for the elderly. In 2002 he helped found Pacific Institute Europe in Warsaw, Poland, in order to bring gerontological and comprehensive care services to the European continent. He was also inspired to explore new ideas for community living and began design of a ‘village’ concept for older adults he calls ‘Elders Academy’. In 2003 he co-founded Elders Academy Press, a publishing program of Pacific Institute and Pacific Institute Europe, specifically dedicated to promoting writings of and for elders. At the same time Nader also began a program of conflict resolution between Russians, Germans and Poles. Last year – combining his passion for the elderly with his love for photography and philosophy – Nader wrote Faces of Aging as a tribute and celebration of being an elder. He continues this exploration through teaching ‘eldership’ workshops in Europe. These meetings explore the difference between getting ‘old’ and growing into the role of an elder and have the purpose of preparing us for old age and eldership. He continues his work by training interns and supervisors in a humanistic-existential approach to psychotherapy and living.